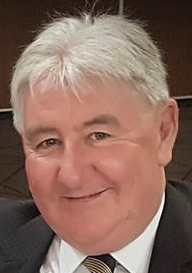 RWBro. Garry Runge, PJGW, has been appointed to the role of Grand Secretary – Masonic Services Manager.

Garry will take up his role on Monday, August 20, 2018 and will be invested as Grand Secretary at the September Quarterly Communication.

Garry will join the staff of FMV and manage the Masonic Services function, providing the Craft in Victoria with member and Lodge support services. As Grand Secretary, Garry will support the Grand Master, and the Deputy Grand Master as well as discharging the Masonic functions associated with the role.

He is an accomplished Detective and Senior Sergeant with Victoria Police, who transitioned into Local Government as a Councillor and municipal Mayor. He served in the 1996-97 Ceremonial Team, being a contributing member of many Grand Lodge committees and currently holds the position of Grand Superintendent of Membership. e has a strong understanding of the Board’s strategic direction and has a substantial wealth of knowledge of the Book of Constitutions and other relevant Masonic principles

Garry began his professional career with Victoria Police serving as a Detective Senior Sergeant where he was the Manager of the surveillance and undercover unit. After fulfilling his goals as a Senior Investigator, Garry expanded his career path within Local Government. In 2004-2005, he was the Mayor for Cardinia Shire Council. From 2005-08, he was the Senior Review Officer for the Office of Police Integrity where he engaged in reviewing complaint files about Victoria Police members and from 2008-09, he was the Director of the Special Investigation Services.

From 2009 – 2014, Garry served as the Director of Sacon Investigations, where he conducted internal investigations and mediation services for the Department of Human Services and Victoria Police. Recently, Garry was the Chief of Staff to a Member of Parliament for the Federal Electorate of La Trobe, where he managed the Canberra office and the electoral office for 5 years.

Having been a Freemason for many years, Garry’s Masonic experience extends beyond the Craft. He is currently the Grand Superintendent of Membership and was the Assistant Grand Pursuivant with the 1996-97 Ceremonial Team. He prepared a strategic plan for the Ritual and Ceremonial Committee in 2016 as well as having co-ordinated the activities of the 25 Inspectors of Workings in 2015. He is a current member of the Rose Croix holding the 18th Degree and a member of the St Andrew Council, holding the 30th Degree. He is also a member of the Victorian Lodge of Research No. 218 and has been affiliated with the Berwick Balcara Lodge No. 359 since 1984.

As an accomplished Senior Sergeant, Councillor and Freemason, Garry joins the Operations team of Freemasons Victoria with a portfolio of successful projects and experience under his belt. The values and principles taught within Freemasonry have directed many of his decisions and the notion of making good men into better men has guided him in both his Masonic and professional career.