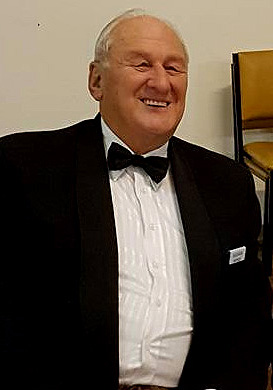 Vaughan was the best of men. A man’s man. One of integrity and absolute honesty. He was Grand Master of Victoria’s Freemasons, 2010-12. And he was a good bloke who enjoyed a laugh.

Vaughan Werner was a former Assistant Commissioner (Crime) of Victoria Police. He started his working life at the Dimboola Post Office, when he was 15.

As a policeman for 34 years, he was held in the utmost respect. His time as Assistant Commissioner saw him oversee traumatic events such as the Hoddle Street shooting in 1987.

Vaughan spent three years as an Australian police adviser in Port Moresby and then Manager of the Police contingent in PNG. He spent a further five years with Price Waterhouse as a corruption consultant to the oil industry.

He enjoyed Freemasonry, and the opportunities it gave men to improve themselves, and better serve their families and their communities. Vaughan particularly enjoyed his membership of the Diamond Valley Lodge, where he often performed as Organist.

It was my privilege to nominate Vaughan as an honorary member of Ivanhoe Grammarians Lodge. He readily gave me sound counsel when I requested it on matters of Masonic law, probity, and about welfare of members and their families.

When I was met with a leadership issue some time back, Vaughan was one of the first to chime in with an email of encouragement: “For all of us who are active people in life, the occasional barrier or eruption arises to meet us at some stage. From the point of view of Bev and I, nothing in the immediate future is going to come between us to invade the solid and most loyal friendship that we have with Fleur and yourself. “

Vaughan had been been at a Lodge meeting at Shepparton on Thursday night (Dec. 12), speaking on his time in the Police Force, and then suffered a massive stroke during his return journey to Melbourne. He was conveyed to hospital by ambulance, but passed away within 24 hours. We are thinking of Bev and the family.

The world is better place because Vaughan Werner was here. Lived respected, died regretted. So mote it be.