‘Meek and lowly, pure and holy,
Chief among the blessed three;
Turning sadness into gladness,
Heav’n-born art thou, charity.’ 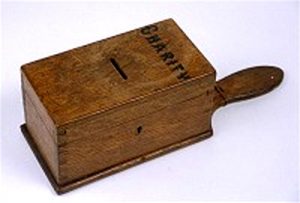 Charity is a cornerstone of Freemasonry.
Ivanhoe Grammarians Lodge has been active in charity throughout its 72-year history.
Charities include the ‘Toys For Tots’ appeal, now known as the Banyule Children’s Gift Appeal.
Lodge members give to a number of charities, and have provided the Rev. Peter Holloway Scholarship in recent years.

The scope of that scholarship is being widened in 2018-19.
Scholarships/bursaries are being provided to needy children a number of state primary and secondary schools in the Banyule municipality.

The Lodge was consecrated in July 1946, 11 months after the end of World War II. One of the first charities supported by our Lodge was the ‘Grand Master’s Food For Britain Appeal’.
MWor. Bro. R.A. Rowe asked that each member contribute 10/- for a food parcel to aid the appeal. The name and address of the member was enclosed with his parcel. Tickets, at 10/- each, were available from the Acting Secretary, Colin McLachlan.
From early days, the Lodge has been a supporter of fundraising for the Freemasons’ Homes.
In 1963, the Grand Master commended members to make a donation to the Freedom From Hunger campaign.
Lodge members were encouraged to boost stocks at the Blood Bank.-

In 1965, the Lodge established its own Benevolent Fund.
Members of Ivanhoe Grammarians Lodge were keen supporters of the Lord Mayor’s Camp each year. The December 1991 raffle enabled the Lodge to sponsor two children to attend the Lord Mayor’s Camp at Portsea during the Christmas holidays.
The Ash Wednesday fires of 1983 were followed by Freemasons assisting with ‘Operation Greenthumb’ planting in the Cockatoo, Upper Beaconsfield, Airley’s Inlet and Macedon areas.
Ivanhoe Grammarians supported this with phsyical support, as well as donations of cash and plants.
In 1989, a ‘Stewards’ Charity Effort’ took place, with the collection of one-cent and two-cent pieces. Stewards provided money bags to members. “Chief money bag is Scrooge Peter Davies,” advised the Summons issued by Secretary, Stewart Peterkin.

The December meetings of the Lodge, since the 1990s, have included donations of gifts for residents of the Royal Freemasons’ Homes, and toys for underprivileged children. In more recent years support has been given to the ‘Toys For Tots’ campaign run through the City of Banyule.

When the Black Saturday bushfires hit in 2009, the School family – particularly those at the Plenty Campus (Mernda) – were directly affected. Then-Principal, Rod Fraser, launched an appeal to assist members of the School family. The Lodge assisted with a cash donation, and members joined with the statewide Masonic Task Force to offer help in a practical way.

The Lodge has been active in raising funds for Guide Dogs Victoria.
It keeps contact with the widows of past members.The Lodge is part of a Victoria-wide effort to collect for the Royal Children’s Hospital Good Friday Appeal.
Freemasons Victoria runs the Ionic and Doric coaching services for students, supports the Royal Freemasons Homes, and is a major donor to the Epworth Freemasons Hospital.