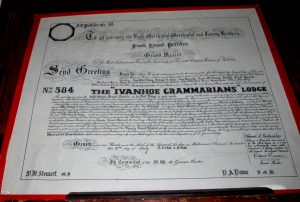 From The Argus. August 19, 1947.
Lodge founder, the Rev. S.L. Buckley, announced his retirement, with the accompanying news that Mr V.R.C. Brown was to be appointed as the new Headmaster of Ivanhoe Grammar School.
Buckley, nicknamed ‘Cobber’ continued as Chaplain of Ivanhoe Grammarians Lodge until his passing in 1964.

Still in the shadows of World War II (1939-1945), the Grand Master, Most Worshipful Bro. R.A. Rowe, urged members of the Lodge to each contribute 10/- for a food parcel to aid the ‘Food For Britain’ appeal.

Ivanhoe Grammarians Lodge was consecrated on July 2, 1946. The Statement of Receipts and Expenditure for the 12 months ending June 30, 1947, were submitted by the Secretary and Treasurer, for the Auditors T.R. Lee and William Hiley.

The Balance Sheet showed liabilities of an estimated £7 for Ivalda Trust dues. On the Assets side of the sheet were a balance of £2.5.4 at the Commercial Bank of Australia Ltd; and the surplus of liabilities over assets for the year, £4.14.8. 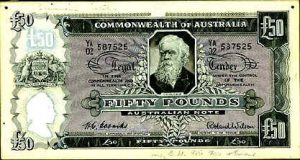 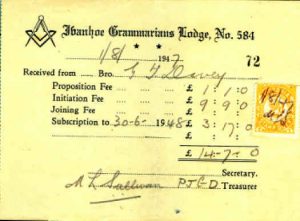 1952: Death of the King
Lodge in mourning

The laying of the Foundation Stone for the Memorial Junior School was scheduled for Saturday, October 16, 1954 at “mid-afternoon”, noted Ivanhoe Grammarians Lodge Secretary, Wor. Bro. Sam Wall.
The ceremony was to be conducted by School and Lodge founder, the Rev. Sydney Leonard Buckley. “All members are invited to attend.”
“The subscription list is still open. Those who have not yet subscribed are urged to contact either Bro. N.W. Buckley or Bro. L.G. Knorr immediately as work is progressing well.”

1954: Official unveiling
Rev. Sydney Buckley portrait
The relationship between the School, the Lodge and the Old Ivanhoe Grammarians has always been close. Lodge member, Wor. Bro. F. Graeme Hawke, as Honorary Secretary of the ‘Old Boys’, wrote to members in 1954: “A short while ago we opened an appeal for funds in order to finance the painting of the portrait of the foundation Headmaster, Rev. S.L. Buckley. This portrait has now been completed and we feel that the artist, Mr John Rowell, has done a worthy and commendable job. Although the response to the appeal has been excellent, the fund is still open and any further donations will be accepted.
“On Friday, September 18, at 6pm, we are holding our Annual Dinner at the Hotel London where the portrait will be on view and during proceedings will be officially presented to the school. This dinner is being held especially during Show Time in order to give country members the opportunity of being present so it is hoped that all Old Boys who possibly can, will be there, in order to make the occasion a memorable one.
“Our old friend Cobber will be our guest and you will be able to make his acquaintance once again. The cost of the dinner is 15/- and you are requested to forward this amount together with the form attached to the bottom of the circular at your earliest convenience.”

1954: Service recognised
Wor. Bro. C.T. Sutton voted as ‘Special Member’
In June 1954, under the Mastership of Wor. Bro. Ray Carnie, he moved (with VWor. Bro. Harry Buckley, PGTreasurer seconding): “That in view of the long and valuable service given to the School, this Lodge and Freemasonry generally, that Wor. Bro. Christopher Thomas Sutton be honoured as a special member of the Lodge.”

1954: ‘Loving Service’
Bro. S.L Buckley voted as ‘Special Member’
In July 1954, under the new Mastership of Wor. Bro. Keith Ormiston, he moved (with Wor. Bro. Ray Carnie seconding): “That in view of the distinguished and locing service afforded the School, its scholars and and this Lodge that Bro. the Rev. Sydney Leonard Buckley be honoured as a special member of the Lodge.” 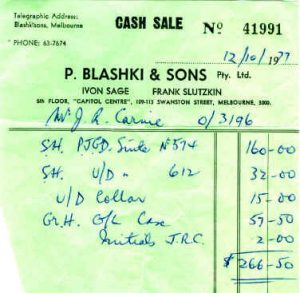 A Lodge stalwart, VWor. Bro. Ray Carnie, passed to ‘the Grand Lodge Above’ in early 1989. Secretary Stewart Peterkin recorded in the May 1989 Summons: “From our sister, Lorna Carnie, the PGIW apron belonging to her late husband, Ray, was passed to Wor. Bro. John Hassell who was similarly honoured. The Freemasons Hospital has received a generous donation from John.”

Amongst the regalia donated by the Carnie family in 1989, was this 1977 receipt for regalia purchased by P. Blashki & Sons Pty Ltd (Ivor Sage and Frank Slutzkin). A not inconsiderable amount.

1989: Lodge member in radio play
Pete Davies acts as English miner
Lodge member, Bro. Pete Davies, acted in a radio play “to celebrate the Centenary organised by 11 lodges in the Heidelberg area”, boted the April 1989 Summons. He played the part of a new chum English miner.

1990: Matching eye-patches
Masters honour Stephen Mayer
When Ivanhoe Grammarians Lodge’s Worshipful Master, Wor. Bro. Stephen Mayer, was badly injured in a motor vehicle accident in early 1990, he had to endure extensive plastic surgery at Austin Hospital. At his ‘final night’ in 1990, a large number of members and cohorts of the No 15 Masters Group attended … complete with eye patches to match Stephen’s own. His final night also included a performance in the ‘South’ by Old Boy magician, Tim Ellis, to “everyone’s amazement … including the incredulous Wor. Bro. Adrian Gray”. A tea dance was held: “Dick Dooley’s Muddy River Jazz Band played for four hours to our and their enjoyment,” Stephen wrote to members.

1996: 50th Anniversary
Lodge celebrates its half-century
Wor. Bro. Professor Frank Hirst was the first-ever Ivanhoe Grammarians Lodge member to receive a 50-year jewel when ‘584’ celebrated its 50th Anniversary at the December 5, 1996 meeting. Frank made the trip from Adelaide for the presentation, and also proposed the Toast to the School. A response was given by Deputy Principal, Nigel Kendall. (Wor. Bro. Hirst has been initiated on December 6, 1946. Master, Wor. Bro. James Downing, acknowledged that the Lodge’s 50th anniversary was in July.) Wor. Bro. Peter Holloway, PGSD, proposed the Toast to the Visitors; with the response given by Wor. Bro. Bill Dodemaide.

Ten with the pre-nominal of VWor. Bro., Geoffrey Davey, was given the task of proposing the Toast to the Lodge. He remarked that he had been coming to the Ivalda Temple since the 1930s, first as a child for the Christmas parties held by the Eaglemont Lodge. It was a family affair for the Daveys: Joe, Morris, Harry, Bill and Clyde. It was a family affair for the Buckleys too: Athol and George had been part of the Eaglemont Lodge since 1924; with Harry and Sydney joining them as initiates in 1924.

Nine of the 29 Foundation Member signatories were members of the Eaglemont Lodge, he said. There were eight initiates in the first year of the Lodge. There was a steady flow of new and joining members for many years, although the Lodge struck difficulties in the mid-1960s. To that time there had been 265 members, comprising 29 Foundation Members, 138 initiates and 98 joining members. This had included father-and-son combinations, a grandfather, and brothers. At that point, Lodge life had comprised 75 per cent of Geoffrey Davey’s life, he said.

1997: New Brother
David Chessum welcomed
The initiation of Bro. David Chessum was welcomed at the November 6, 1997, meeting of Ivanhoe Grammarians Lodge. “It is many years since we have initiated a candidate in the Lodge,” remarked Secretary, Wor. Bro. David Waugh, in the Summons.

1997: Principal visits
Prize in honour of late Brother
Ivanhoe Grammar School Principal Rod Fraser attended the ‘South’ of the Ivanhoe Grammarians Lodge on June 5, 1997. He was presented with a bequest from the late Bro. Eric Alston for a Year 12 prize: ‘the Eric Alston Prize for Biology’. Eric had passsed in September 1995, leaving a bequestof $500 to the Lodge.

1994-1996: Chapel Services at Ivanhoe Grammar School
Chapel Service re-introduced
After a gap of a number of years, a Lodge Chapel Service was re-introduced on Sunday, July 31, 1994, at the School Chapel of the Holy Trinity. All Lodge members and their families were invited to attend. The service was conducted by the Rev. C.T. (Peter) Holloway PSGD. Master of the Lodge was Wor. Bro. Wayne Smith PJGD, who presented the Volume of the Sacred Law to the Oficiant with these words: “Reverend Sir and Brothre. I beg you to accept the custody of the Volume of the Sacred Law, being the most valued possession of every true Mason.”

A similar service was held on Sunday, July 30, 1995, with the Rev. Charles Sligo acting as Officiant. This was the final Lodge Chapel Service conducted by RWor. Bro. Sligo prior to his retirement as Headmaster of Ivanhoe Grammar School. In December 1995, the Lodge under the Mastership of Wor. Bro. Daryl Johnson, presented a Masonic Shield to RWor. Bro. Charles Sligo, in appreciation for his service.

One of the first ‘Masonic Church Services’ for the Lodge had been held at the Ivanhoe Baptist Church on Sunday, December 5, 1948, with an address given by RWor. Bro. His Honour Judge C. McC. T. Stafford, PSGW.