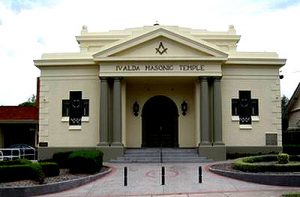 On April 5, 1923, representatives of Ivanhoe, Darebin and Alphington Lodges met and discussed the advisability of building a central Temple in the district of Heidelberg worthy of Freemasonry. As a result this magnificent Temple, stands today due to the combined efforts of Ivanhoe, Alphington, Darebin, Eaglemont, Samaritan, Ivanhoe Mark Lodge and The Royal Arch Chapter.

It was officially opened by Wor. Bro. Sir H.H. Olney, P.J.G.D. The name IVALDA originated from the local lodges taking the first two letters of the three lodges Ivanhoe, Alphington and Darebin.

The Temple was designed by Architect, Bros. B. Dunston Reynolds, W.H J. Bailey, as the Builder, assisted by his late father, Wor.Bro. W.A.H. Bailey. The honorary architects were Bro. D. Reynolds and Wor Bro.T. Mclntosh. Valuable assistance was given by Wor.Bro. T.M. Dickson, P.S.G.D. by his attention to the legal work, including the preparation of the deed of trust by Wor.Bro.M. Sullivan, P.J.G.D.

The turning of the first sod in connection with the building was performed by Wor.Bro. Sir H.H. Olney, PJ.G.D., Chairman of the Trust, on October 16, 1923. M .Wor.Bro. Hickford conducted the impressive ceremony of laying the foundation stone, and at 2.30 pm the choir opened the proceedings by singing a hymn, and V. Wor. Bro.T.B. Reed, Grand Chaplain offering a prayer. M.Wor.Bro. Hickford gave an address appropriate to the occasion.

Since then many improvements have been incorporated. The addition of a rehearsal room, disabled facilities including a lift and toilets, a major kitchen upgrade in accordance with health regulations. The latest improvement was the installation of reverse cycle air conditioning to almost all areas of the building. This has ensured that the Ivalda Masonic Centre premises represent one of the best Masonic facilities in the metropolitan area.

Inside Our Temple
Ivalda Masonic Centre 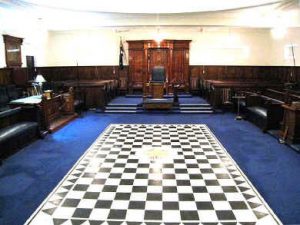 Towards the ‘East’ and the chair of King Solomon.

Debentures for Extension
The mid-1950s saw a rapid expansion of Freemasonry throughout Victoria. Expansion plans were announced for the Ivalda Masonic Temple.
In November 1954, Ivanhoe Grammarians Lodge Secretary, Wor. Bro. Sam Wall, said: “Some months ago the Ivalda Temple Trustees invitaed all members of local Lodges to apply for Debentures of £5 each, bearing interest at 4 per cent per annum, to provide finance to cover the cost of extensions and improvements of our Temple. With this Summons is enclosed a further application form which may be used by those members who have not yet made an investment.”

In 1955, Wor. Bro. Sam Wall, noted: “The Debenture target for each Lodge has been determined on a membership basis – an average of about £15 per member. Up to the present, £325 has been contributed or promised by members, leaving a balance of £1005 to be obtained to reach or traget amount of £1350. As the need for funds is urgent, please make your application for debentures without any further delay.”