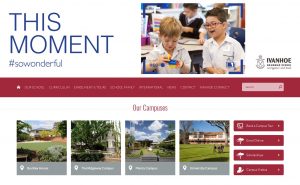 Ivanhoe Grammarians Lodge is connected to Ivanhoe Grammar School, although many Lodge members do not have any connection with the School.

In 1915, the parish to which the Rev. Sydney Buckley had found himself appointed in absentia was that of Ivanhoe, a district lying to the north east of Melbourne on the banks of the Yarra and within the old Shire of Heidelberg. Heidelberg had been settled early in Victoria’s history and the town had acquired a character

The beauty of the district’s gentle undulating terrain and the pastoral charm of the Yarra valley had attracted painters and artists. Among those who had found its serene and tranquil atmosphere conclusive on their art were Condor, Tom Roberts and Arthur Streeton who had set up their camp there in the 180s and the works of their ‘Heidelberg School’ became a milestone in the history of Australian art.

Ivanhoe was a newer district but shared the same plesant setting. When Buckley became Vicar (of St James’ Church of England, Ivanhoe) it was in the earlier stages of developing into a new and attractive suburb of Melbourne. It extended from the beautiful Fairy Hills near Alphington to Eaglemont on the outskirts of Heidelberg and from the River Yarra to the Darebin Creek.

The Parish had been held first by Roscoe Wilson, afterwards Dean of Melbourne, and later by Horace Crotty, afterwards Bishop of Bathurst. Buckley was, therefore, following two men each of whom had been of outstanding ability. Their leadership had left its mark, not only in the fine parish church of St James and in a Sunday School and Vicarage, but in a splendid band of workers. Buckley soon found that they were still responsive to enthusiastic leadership. The Parish had till this time used an old wooden building as a Sunday school. It had served its purpose while the Parish had been concentrating its endeavours on more urgent work. But it had become inadequate and out of keeping with the Church itself. Inspired by the new Vicar’s infectious enthusiam, the Vestry arranged for the Sunday school building to be demolished and replaced by a handsome Parish Hall which is still adequate for its purpose today. 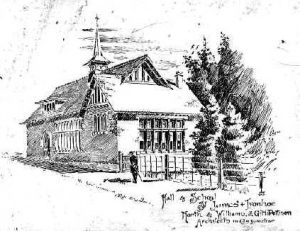 The building of the Parish Hall, which was completed towards the end of 1914, was a significant event in Buckley’s career as will be seen from the development that shortly folowed. In addition to the main hall, the new building included two large club rooms, one at the side and one at the rear of the building. Miss Frances Lowe, who conducted a private Girls’ School in the neighbourhood of the Church, and who needed additional accommodation, was granted a tenancy of the main hall. The two club rooms, however, were not normally in use by day except on Sundays.

The new Vicar had immediately taken a keen interest in the boys’ choir and attended regularly at their choir practice. On his remarking one day to his choir boys that he wished he could see them more often than on practice nights and at Sunday services, one of them said “why can’t we have a school here?” Buckley, who had discovered an increasing interest in the education of boys, leapt at the idea. The two club rooms would be sufficient for a beginning and he himself would provide the full time staff. He immediately put his idea before the Vestry.

Henry Amos, a vestryman of St James at the time Buckley became Vicar, and for many years Secretary of the School Council, has described the Vestry’s reaction to the proposal: “We now had a splendid building eminently suitable for a day school in a beautiful and rapidly growing suburb, with no other school on similar lines nearer than Scotch College, East Melbourne, and then I think I am right in saying that Buckley saw his vision of what the School might become in the future. The idea immediately began to grow, consultation took place on the furnishings and teaching staff, and on September 16, 1914, the Vestry authorised the purchase of a block of land of six acres in Waterdale Road the price of £750 for a playing ground.”

The land was purchased from Bowes Kelly. It was near where the Repatriation Hospital now stands. The money to buy it was lent by the Diocese and was repaid five years later when the land was sold for £1421, at the time was negotiating the purchase of Ivanhoe House.